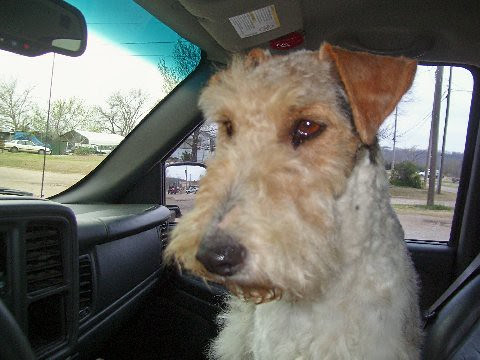 Mom and I were cruising around town this week when we saw something that was quite startling. Our small town movie theater is being demolished! What a sad sight. It was built in 1926 and was a grand old building for its time. It closed seven years ago and had fallen to disrepair. Windows were broken, pigeons were roosting, and it just had an abandoned look about it. We were hoping someone would remodel the theater and open it again, but I guess it wasn't to be. Of course, being a dog, I thought it looked interesting anyway and wanted to sniff around, maybe find some vermin or pigeon poo or something wonderful, but Mom wouldn't let me out to investigate. She said it didn't look safe anymore. 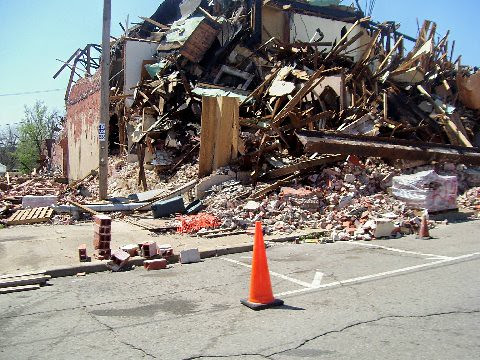 Mom and Dad used to go there to see movies waaaaay back in the '70's when they were dating. That was before my time, about when the Superman movies began coming out. Mom always liked those movies because Dad was a dead ringer for the young Christopher Reeve (sans the Super suit). Heads sure turned when they went to the cinema together. Going to the movies was a real treat back in those college days when they were starving students. Sticky floors, crowded seats, buttery popcorn, and little kids kicking the back of the chairs...what memories!

Now that special place is just a pile of bricks and rubble, slowly being hauled away in truckloads. In a few weeks, nothing will be left but a vacant lot. Maybe, just maybe, something nice will be built in its place. We'll just have to wait and see.

It won't be the same without Christopher Reeve, though.
~Tell
Posted by William Tell at 10:21 AM

Muzzer always hates it when an old building is demolished like that. So many memories lost. Good thing your mom and dad have fond memories of the place.

Will Tell,
Why do they always have to tear down special places? They are always demolishing buildings around here but lately they have been saving some of the best ones for rehab. Tell Superman Asta Marie said "Hello!"

Aw, that be sad, but at least there are nic ememories left.

Our mom agrees...it's always sad when an old building is torn down. About a year ago, she went to her home town and couldn't believe all the old buildings that were gone! Really sad!

We sure hate to see the old buildings come down! History is gone in a flash! Thank goodness for memories!

Love ya lots,
Maggie and Mitch

Oh what a shame they demolished a beautiful old building. Silly humans they should have fixed it not pull it down.

Our Mom hates it when something special is demolished to use the site for something ordinary!!!

Oh PL2 gets sad too when things are demolished like that.... We'll just have to make new memories she says...Love A+A