Oklahoma has been having a terrible drought problem this summer, and the triple digit temperatures are setting records. It's not even fun to go outside anymore because it makes us pant so hard. And you know when I'm not digging a hole or roaming the farm, it's a serious matter. All we can do is sit inside and enjoy the air conditioning. That's what I was doing when I happened to hear a car and looked out the window. Wouldn't you know it, a police officer was walking up to the front door. Well sir, I can tell you that had me worried and I was trying to think what in the world I had done this time that they were sending backup to our house when Mom met him at the door. 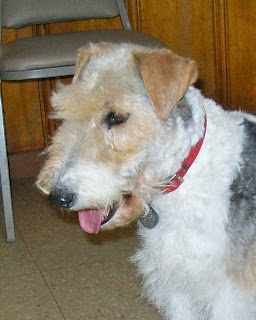 The officer was carrying something small and fluffy in his hat. I was all for eating it on the spot, but My Girl made a nest out of towels and a cardboard box and then put that puff-ball in there. The officer said he didn't know what it was but he saw it sitting on the side of the road looking all lost and forlorn, so he picked it up and brought it straight over. 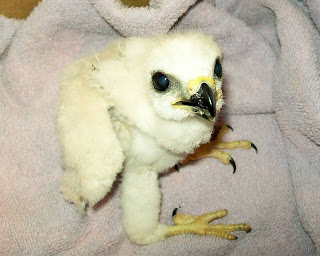 I said I thought it was an iggle, our national bird. There are a few iggle nests around these parts. Whew, good thing I didn't eat it, huh? Mom said it was a very odd bird and that it was something she didn't feel all that confident taking care of, so we called a friend who works for the Oklahoma State Department of Wildlife. He came and took this little bird home with him and did some research. It is a Mississippi kite, a small bird of prey. Kites nest during the hottest part of the summer and this has been a very bad year for them. They are jumping out of their nests in record numbers trying to find relief from the extreme heat or else they will die in their nests. Poor babies! Most wildlife rehab workers for the state take in about 10 orphan kites a year, but they are now taking in about 10 A DAY! One place has over 60 babies kites they are feeding. So now I'm really glad I didn't gobble it up, it was having a hard enough time just surviving. Happily, Little Puff is thriving today and should be able to migrate to South America this fall with the rest of the kite families. I hope he thinks about us down there this winter, and remembers fondly how we helped him on his way. And that I didn't eat him.
~Tell
Posted by William Tell at 10:13 AM 7 comments: