Check out the Petition! 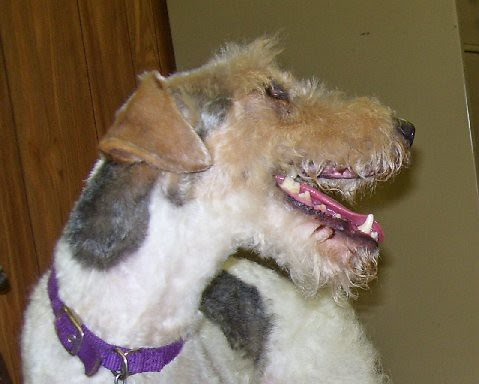 The petition to save the fox terriers from being returned to convicted puppy mill owner Marc-Andre LaPorte now has 14,000 signatures! Only 1,000 more to reach the goal. Thanks to everyone for helping to support those neglected dogs and ensuring a happy future for them.

We are smiling today!
~Tell
Posted by William Tell at 12:07 PM 8 comments: 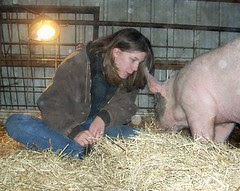 My Boy and My Girl went to an FFA livestock show yesterday. This was the big show that they have been looking forward to for months. All that special feeding, walking, bathing and shining up those piggies was a lot of hard work.

My Girl sat down in the pen and gave Tammy Faye the bluebutt pig a little pep talk before the show. It's funny, but those pigs actually like riding in the trailer (like I ride in the pickup) and have a great time at the shows. They're really not so different from dogs, when you get to know them. Tammy Faye was a little nervous at this big show, but she likes My Girl so she calmed right down and the butterflies went away.

When the kids and pigs got home, they had three Reserve Breed Champion trophies! All that hard work and exercise paid off well. Everyone came home tired and smelling funny, which was rather interesting to me. The pigs admitted that with this kind of success, they can't wait to load up and go to the next competition.
As long as they understand that pigs ride in the trailer. Riding shotgun beside Mom is MY spot!
~Tell
Posted by William Tell at 9:26 AM 12 comments:

The special homemade jerkey arrived in the mail from Chez Bogart, and what a treat! Talk about scrumptious! Cap and Glynn both liked the beefy Hearty Chew, but I myself perferred the Chicken Chips. The smell, the taste and the texture were superb.
Then I got one of my great ideas. Actually, this one was quite brilliant. Really, I do have them now and then.
I raced out to the barnyard and looked up my old buddy, Oz. You may remember Ozzie the rooster from The Feather-Plucking Incident of '07 (of which we do not speak). Anyway, I told ol' Ozzie about the chicken chips, and suggested that he might want to donate his chips to the Greater Good... 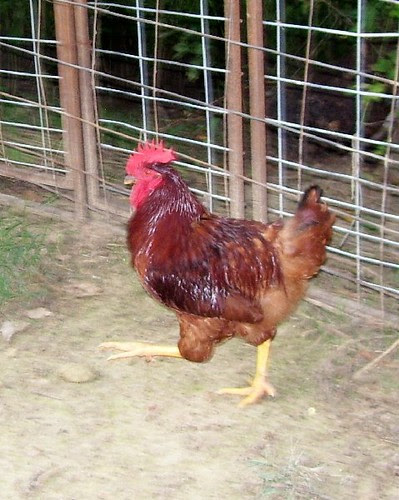 "Whoa! Look at the time!" exclaimed Oz as he high-stepped across the yard and around the barn. I guess he had someplace to go. A bus to catch, maybe. He seemed in a terrible hurry and didn't even get to hear the rest of my plan for making our own chicken chips.
So I guess when I get a hankering for more, I'll have to contact Bogart and get some from him. We probably don't have the equipment or know-how to make our own, and we'd love to visit with Bogart some more anyway. Those jerkey treats sure were good.
But I still think my idea might have flown...
~Tell
Posted by William Tell at 6:21 AM 14 comments:

A Bird in the Hand

Many times our family takes in strays, or as we call them, "homeless Americans down on their luck". We like to give them a foster home until they are back on their feet and able to find a forever place to live. We've helped Boxers, Jack Russells, Schnauzers and even a cockatiel. It's a great feeling to help another animal and make a difference.

Our latest foster, however, really has me stumped. It's not a cat or dog. It's not even a pet, but you know Mom and Dad. They can't turn away an animal in need. 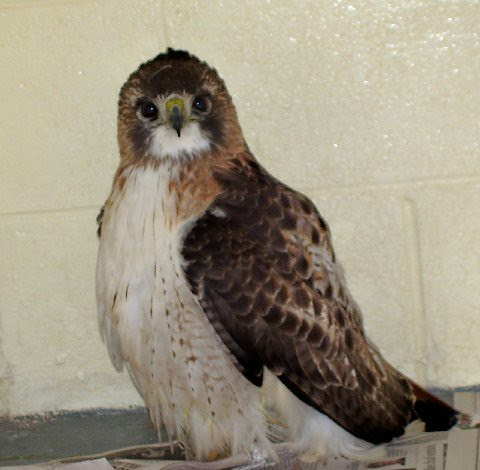 This guy was found by two little ladies picking up pecans. He had a steel trap on his leg. They scooped him up into a bucket and called the game warden, who said to bring him to us. Fortunately his leg wasn't broken, just skinned and bruised. With a little ointment rubbed on it, he'll be good as new.

Mom has mislaid her bird book, but she thinks it's a Cooper's hawk, so we're calling him Cooper for the moment. Doesn't he have a very indignant look on his face? It's like, "Now how did I get myself into this mess?"

Cooper will be leaving us this afternoon. We think he's fit to fly again. Mom says not to expect to see or hear from Cooper after he takes off as they rarely look back once they're airborn.

And they never write or call (sigh).
~Tell
Posted by William Tell at 2:29 PM 8 comments: