It's been a week since Rum Tum's hernia repair, and he's home from the vet hospital now. Mom says the money for this is coming out of my allowance. I did make the suggestion that it would have been cheaper to just buy a mouse trap for the barn, but noooooo, The Family wanted their cat back. And it one piece, too. Go figure. I also said that there are people who pay big bucks for such a tummy tuck and would appreciate it, but my voice seems to fall on a lot of deaf ears at the moment. 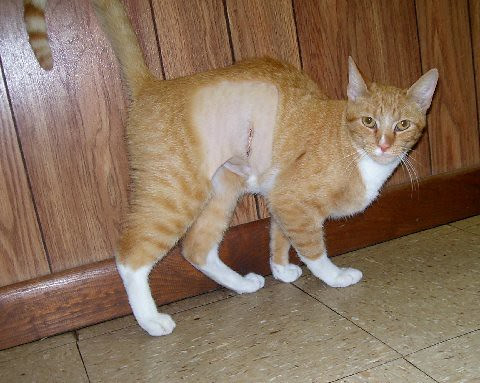 While we were at the vet hospital, Mom was admiring some of the antiques things on display in the waiting area when she saw this contraption. 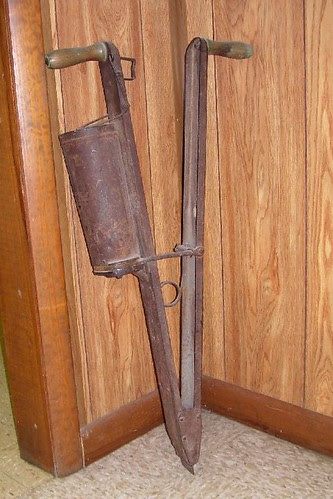 Looked painful to us, so we had to ask the Doctor what it was. Can you give it a guess? I'll let you know what he said in my next post.

I Get No Respect 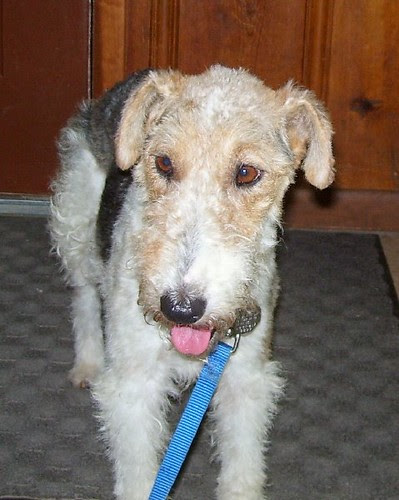 For a few weeks now, The Family has noticed that one of the barn cats has developed a hitch in his get-along. He walks a little funny, kinda like John Wayne, and has a large, hangy-down lump on his side. He's been a little hard to pin down so they haven't been able to investigate this oddity any closer until today. It hasn't seemed to bother him much. He still eats and lounges around in his striped jammies all day with the rest of the rat patrol, but this has been a bother to My Boy and My Girl. The Family wants answers.

This morning, My Girl was able to catch the tabby cat and he was taken to the veterinarian. And what did they find out? Kitty has a hernia. I myself think it happened because he wasn't lifting with his knees, but everyone else thinks something else. Can you see where this is going?

Yes, you're right. The finger is being pointed at me! Hey, just because I played tuggers with a cat one time, does that mean that I did this on one of my romps outside the yard? There is absolutely no shred of evidence to support this accusation. Nothing at all. They can't prove a thing, and the cat's not talking.

Now Mom is miffed because the cat is staying at the hospital, there will be a vet bill, probably a little physical therapy and recoup time at home, etc. Said cat will be waited on hand and foot around here until he's returned to outside duty once again. Much ado about nothing, I say, but nobody is listening to my opinion right now. Like Rodney Dangerfield, I get no respect.

Then again, it might not be so bad having a kitty in the house for a little while. Here, kitty, kitty, kitty...
~Tell
Posted by William Tell at 4:59 PM 9 comments:

No sooner did My Boy get back from summer camp than the whole Family went on vacation together. I guess I can't begrudge them a little time away, since they only take vacations about every five years or so, but this time we terriers didn't get to go along. Once again, boooring!

So while we pined away forgotten at home, they headed for the great state of Arkansa and while they were there, My Boy and My Girl did a little cave exploring. It's called spelunking, but I think it sounds an awful lot like the Earth Dog Trials I'm hearing about. They did find some rats, only they had wings and flew around faster than lightning. I believe My Boy and I will have to do some exploring soon and find a cave closer to home so we can spelunk together. 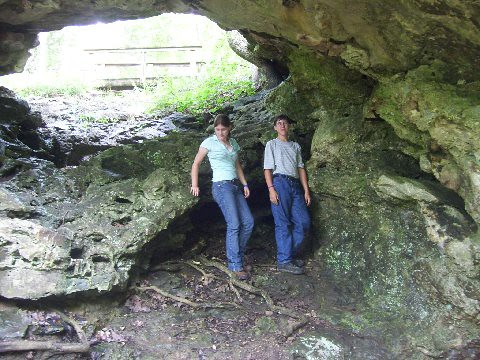 They also saw a Pivot Rock, and in this photo it looks mighty unstable to me. A good puff of Oklahoma wind would knock that right over. 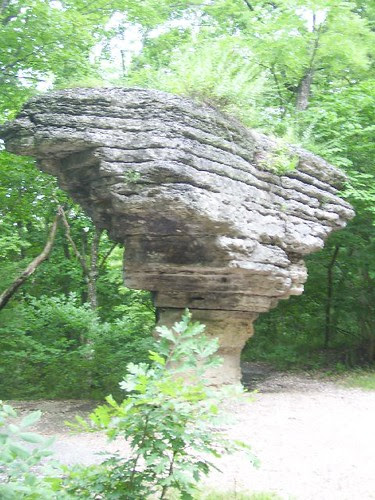 Walking and shopping was fun, and they found a biker store and bought leather jackets for their motorcycle rides this fall. Mom said all that uphill and downhill climbing on those steep and narrow streets was almost too much for her. If she lived there and did much shopping, she'd have prettier thighs than Richard Simmons.

While they were walking, they saw a monkey in a dress. She was just too cute! People were giving her dollar bills. She's taste-testing this one before she gives it to her dad. 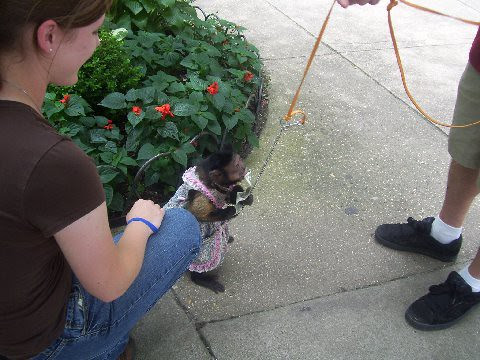 So what did Cap, Glynn and I do while My Family was out having a good time? We had a housesitter come and take care of us. I don't know why everyone thinks we needed supervision, do you? It wasn't like we were going to make some long distance phone calls, try on shoes, or order heaps of pizza on the credit card when they weren't looking. It wasn't so bad, though, as I did manage one great escape by squeezing past the housesitter's legs, but she caught me pretty quick. I taught her that you gotta be fast on your feet to keep up with me.

Waiting for My Boy 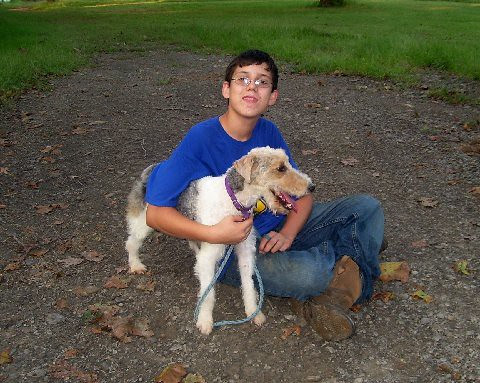 Well, summer has turned out to be a bummer so far. My Boy has gone away to camp, and it's just not the same without him on the farm. None of the rest of My Family know how to wrestle, roach, play DogBall, hunt for squirrels, gather eggs, dig holes, go bobbing in the creek, or any of the other fun things we share. Can you say Boooooring?
The good news is that he comes home today! I've waiting all morning for him, but My Girl says he won't be here until after lunch. Who can eat lunch when we're this excited? And I think that clock in the kitchen is broken because it's not moving as fast as it should.
Sigh. I can hardly wait.
~Tell
Posted by William Tell at 1:28 PM 10 comments: