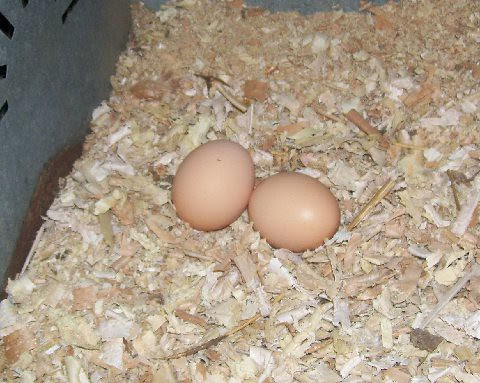 Hi ho, everybody! I've been a good dog this week. At least that's what The Family is telling me. I haven't escaped from the yard for a whole week now, so I CAN be a good dog when I have to be. I was so good, in fact, that I got to help gather eggs from the hen house this morning. Since they're under my protection, it's imperitive that I check security and don't let a fox or possum in. Here are pictures of some of the things I am responsible for. These are brown eggs, and the yolks are extra bright yellow, none of those pale store-bought eggs on our farm! Sometimes I am given one of these to play with. You gotta play real easy with these, otherwise they explode and turn your beard yellow.

We also have three laying hens. Their names are Lucille, Rosita and Henrietta. They are called Production Reds. They eat bugs, which is a not cool thing to do, but they seem to like it. 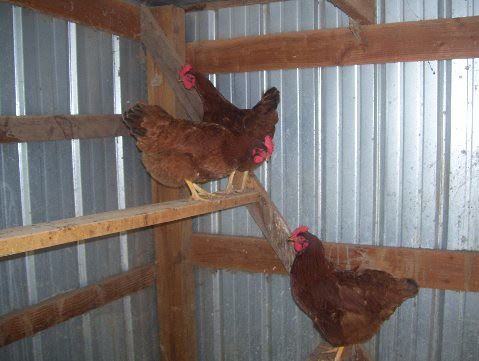 After feeding and egg-gathering, I got to take a ride in the pickup and we went to a feed store. I think feed stores have the most marvelous smells in the world. We got a surprise on this trip, too. We brought home baby chicks! 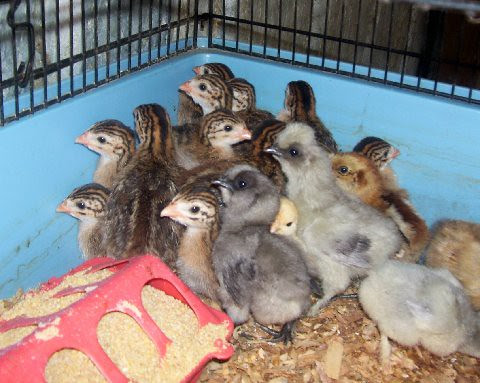 We bought guineas for tick control, and bantams just because we like little chickens with feathers on their legs. See that cheeky fellow front and center. Is that a little roo, or what? He looks like trouble to me!
~Tell
Posted by William Tell at 4:59 PM 13 comments: 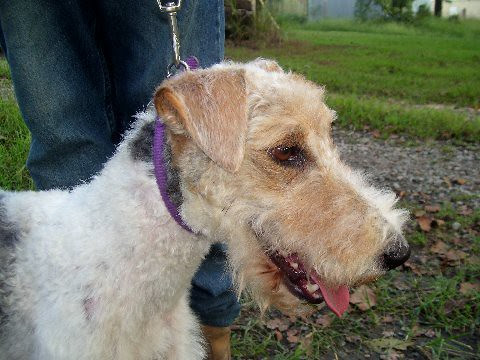 If you read my last post, you know how much I love to escape from the yard and run free. It's hard to resist all those tantilizing new smells that come along in the springtime. I get excited just thinking about it. Actually, I've escaped four times in the past three days and I'm loving every minute of it!

Mom says it's not a safe thing to do, even though we live in the country. My Boy says that if a car doesn't run over me on the road, a coyote or a Sasquatch will get me. I'm pretty sure I can outrun them all, so I'm not worried. My Family is not very happy with my newfound freedom, though. Mom is frustrated and at her wit's end, and My Boy is worried. But hey, I'm a dog and gotta have fun!

My newest method of escape saves me lots of time and energy better spent on exploring. I run at the fence, jump and ollie over. It only takes an instant. Nothing can stop me now. Glynn and Cap can't do it, so I'm pretty much on my own then. I don't mind, though. Once I'm over the fence, I've got it made.

That is, until today. Mom and My Boy spent some time reinforcing the fence. I watched as they attached a wire to the top all the way around and hooked it to a box. One skinny little wire. Do they think that's gonna hold me back? Don't think so. Not a chance. I'm much too good for that. If it won't hold water, it won't hold me, I say.

I waited until they went back in the house, then I made a dash for the fence. Up, up, up and...

I can't actually say what happened, because it was all so fast. My nose tingled all the way to my toes, and I forgot what I was doing for a second. My hair may be a little more wiry than before, too. I believe I will have to sit back and study this little wire and think about it before I try it again. Wouldn't want to mess up my brain cells or anything like that. I think it did affect my hearing, because I thought I heard Cap laughing.

So if anyone is looking for me, I'll be digging under the maple tree. I don't think trees have been known to snap pups on the nose, have they?
~Tell
Posted by William Tell at 4:54 PM 13 comments: 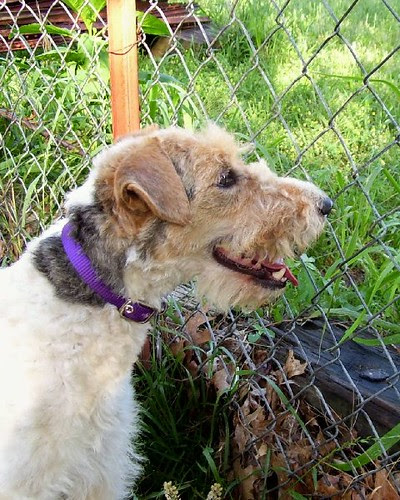 As most of you know, I love to dig. It's good exercise, it aerates the dirt, and improves the general landscape of the yard. It's one of my favorite pastimes. Cap says I will dig a hole to China. Someday I will test that theory. I just enjoy the smell of dirt and feel of it under my toes.
Today I was digging over by the edge of the yard, and I must say I had quite an impressive trench going. Suddenly, my head popped up on the other side of the fence. It only took a second for me to realize I had engineered my own escape tunnel, and I was good to go. With a wiggle and a twist, I was outa there!
First I checked out the barn for vermin. Apparently the cats keep the mice away, so I treed all the cats. I then inspected the chicken pen. Good sturdy fence there, so no fox in the henhouse on my watch. Leo and Cedric were too busy munching grass to play, so I moved on from the goats' area. I patrolled the entire farm, which drove Glynn bonkers. She wanted to come with me so much, but all she and Cap could do was watch from the yard. 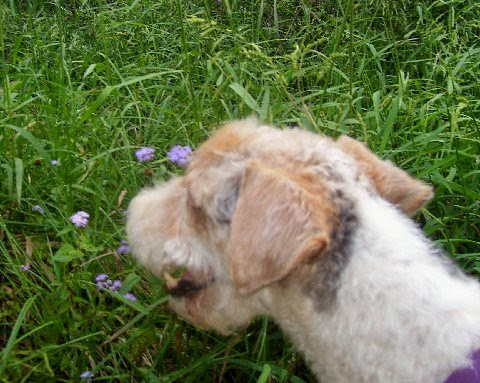 As I checked out the lower meadow, I found the most wonderful, intoxicating and rancid thing to roll in. I'm telling ya, this was really ripe! I spent some quality time roaching it in real good. Then I went to the creek for a drink and had fun bobbing for fish. I returned to the smelly spot to roll some more in case I had washed some eau de rotten off while I was wading in the water. I marked the spot in case I want to visit it again.
Finally, I heard a pickup in the driveway. It was Mom coming home from work. When she saw me, she stopped, honked the horn and opened the door. Well, you don't have to invite me twice to go riding in the pickup. I hopped right up into her lap and gave her a big nuzzle hello. 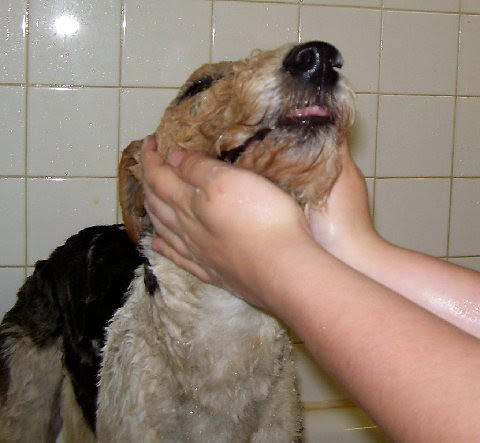 Oh-wet-stinky-dog-rotten-bad-gag-gag-gag...I heard all the way to the house. At least Glynn appreciated my new smell. Cap just muttered something about young whippersnappers and shook his head. Mom hooked one finger in my collar and crab-walked me at arm's length straight to the bathtub. What? Another bath so soon? But it's not Saturday yet...
Oh well, it was totally worth it!
~Tell
Posted by William Tell at 4:36 PM 9 comments:

It's Raining Cats and Dogs 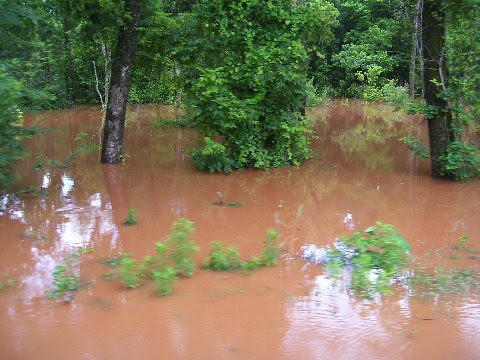 It's been raining hard for three days, and we even had some tornado warnings yesterday. Things are getting a bit soggy underfoot. The flagstone patio is holding puddles of water, and big drops of rain are falling from the trees. Here's a picture of the Deep Fork River near our farm. It's running over the banks again and flooding for miles. Fortunately our house isn't in any danger, but can you imagine living next to this? Pretty muddy, but good for fishing.

My Boy says it's been raining cats and dogs. Well, I don't know about that as I haven't seen any cats or dogs falling from the sky. I think he's making that part up, but wouldn't it be funny to see big German Shepherds, little fluffy pooches, calicos and tabbies all falling tip over teakettle and landing with a splash? Okies sure have a funny way of talking.

When I looked this expression up, here's what I found:

It's Raining Cats and Dogs
Meaning: A torrential downpour.

Origins: Several theories exist about the origins of this phrase. One from the seventeenth century England suggests that heavy rains caused flooding and, sadly, carried the floating bodies of dead dogs and cats along the streets. Not sure I really like this explanation, I can tell you. Some others suggested that dogs and cats who happened to be on the roofs of houses would fall through the wet thatch. Silly idea, why would a dog be on a roof? Cats, yes, but dogs? Another theory links this expression to mythology and superstition. It was believed cats had influence over weather. Perhaps this connection came from a belief that witches, who rode the wind, sometimes took the form of cats. Dogs were attendants of Odin, the storm god, so sailors used to associate dogs with storms.

Here are some other funny dog expressions we hear around these parts...

The Hair of the Dog That Bit You -- A pick-me-up alcoholic beverage you down in the morning after an indulgent night of drinking.

Go to the Dogs -- To fall into disrepair, or to otherwise deteriorate in quality.

Barking Up the Wrong Tree -- To be off course, or to search for something in the wrong place. Cap does this alot when he forgets where he left his squeakie.

The Dog Days of Summer -- The hottest time of the year, usually July through August hereabouts.

I'm sure there are other doggy expressions, but these are the first ones I thought of, and we hear them alot here in Oklahoma. What expressions do you hear in your part of the world?
~Tell
Posted by William Tell at 4:42 PM 10 comments: