It's stopped raining now, but still chilly outdoors. Since we were getting a little bored sitting around the house, Mom took us to the office so she could get some work done after hours. Right away, Cap raided the toy box and pulled out some squeakies. I took the opportunity to show Glynn how to play tug of war. Hey Glynn, like this! 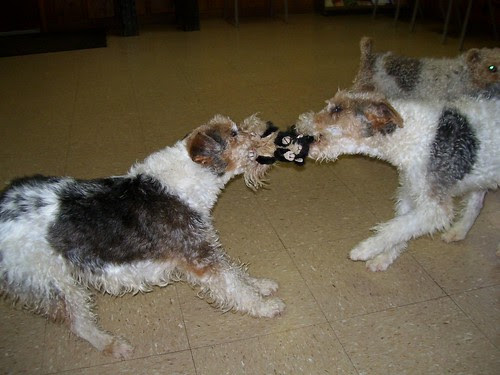 Of course, Cap is not altogether amused that I tried to pull on his chosen squeaky and he let out some terrific grumbles, but held on like a trooper. Not easy for him to do, either, with his smooth mouth, so I went easy on him. 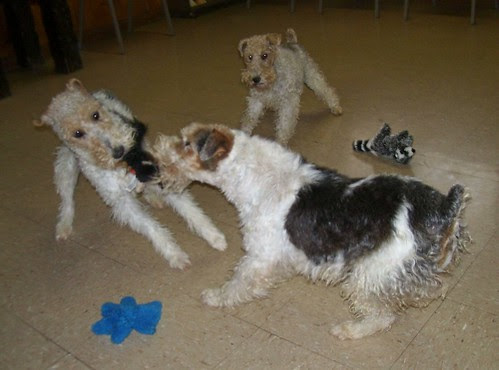 I told Glynn, "Do it like this! You gotta getcha some grrrr, Girl!" You can see Glynn watching and taking notes. 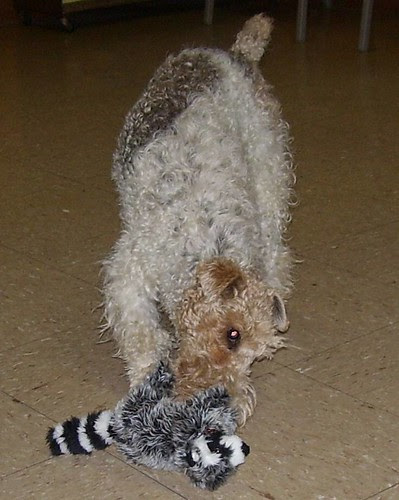 In the end, she did grab a squeaky raccoon and give it a shake. We're making progress with the toys. After that, she played with a piece of paper on the floor. A piece of paper! She just doesn't get it sometimes, but we keep trying.
It was a fun afternoon and we were able to let off a little steam in spite of the cold winter outside. Still, when spring gets here, we may hit the barns and sniff out some real squeakies!
~Tell

It's another drizzly day. The air is nippy outside, with just enough rain to make us cold when we go out. My Girl and My Boy left early this morning for a livestock show and took a trailer load of piggies with them. Dad went along to help out. Now it's just Mom and us at home, looking out the window at the birds on the feeder. Maybe we'll see a squirrel or two. (sigh)

You Make My Day!

Thanks to Agatha and Archie, and also The Thuglets for giving me this nifty award! It's a special treat to receive an award because someone likes to read my blog. Thanks, guys and dolls!

Now I'd like to pass this award on to someone who made me smile today. Mackie, here's to you for your hard work in placing not just one, but TWO wire fox terriers in forever homes this weekend! Casey and Maggie are two very lucky dogs.

You make the world a better place, buddy.
~Tell
Posted by William Tell at 5:50 PM 8 comments:

Don't get me wrong, I like girl dogs, especially my little sis, Glynn. Although she doesn't play Tug-of-War, she will give a good game of chase (which is my second favorite game). We share our dinner bowls every day. Her favorite place to sleep is curled up next to me. Anywhere I go, my little shadow follows.

But girl dogs sometimes give mixed signals that we fellows don't understand. Mom and Dad have a hard time figuring out Glynn, too. Is she spayed, or not? The rescue group didn't know. I don't even think Glynn knows for sure. Don't ask me, I plead ignorance. Cap's also confused, but with his age I'm not surprised.

Last week, College Kid took Glynn on a long car ride to the big teaching university in Stillwater. The vets there looked Glynn over from tip to teakettle, poking and feeling all around. Glynn has always been a shy girl, and this was not something she enjoyed very much. She said the scariest part was when they rolled her over and squirted cold goo on her tum-tum so they could see her insides with an ultrasound. She was so tense and nervous that the doctor leaned over and told her, "It's going to be alright, sweetheart, really!" Maybe he likes his tum-tum rubbed, but Glynn doesn't. 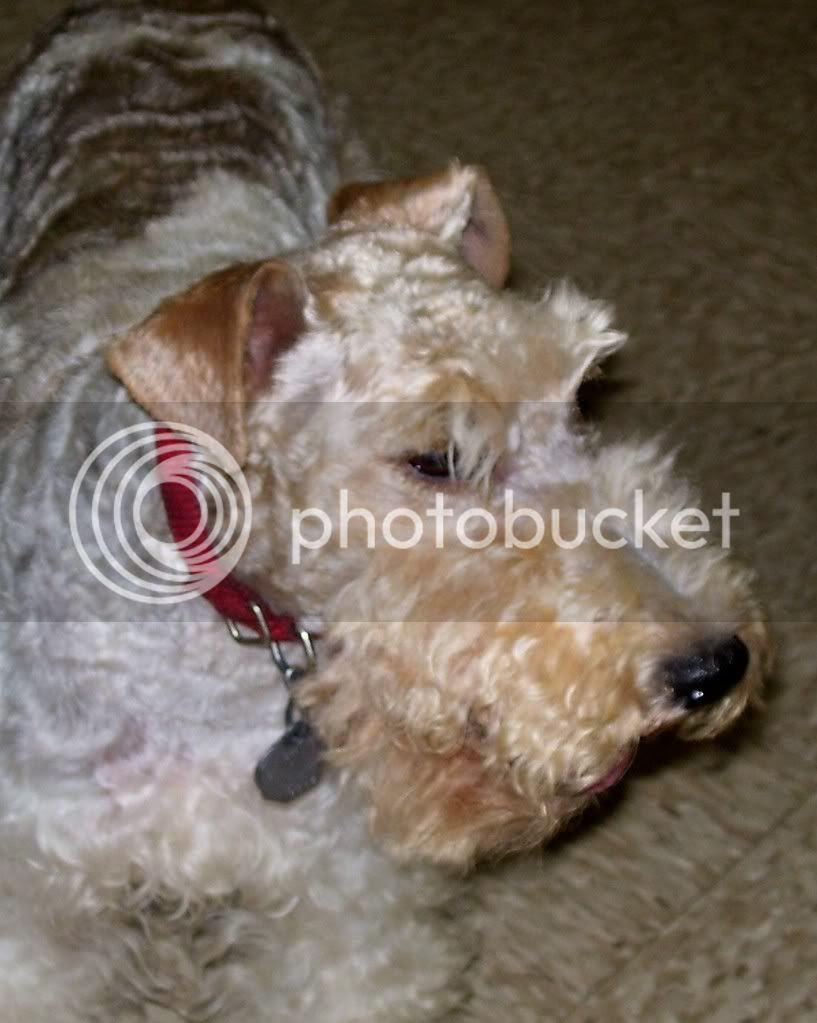 After all the tests, the doctors said that Glynn has been spayed, but a remnant of ovarian tissue was left behind and is still producing hormones. I don't know what any of that means, but at least she won't be having surgery or puppies. Glynn says that's just dandy with her.

When Glynn got home that night, she was stressed and tired from the long day. She's definitely a homebody and doesn't like leaving the house or yard. I worried about her for a little while, but she settled down soon and went right to sleep.

The next morning, Glynn was bouncing around and nipping me like she always does. She ate a big breakfast, then we romped around the yard. Things are back to normal.