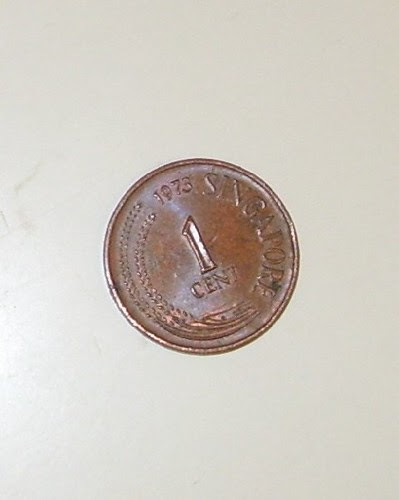 I was at the office today helping Mom break open a new roll of dimes for the petty cashbox, when out popped a surprise. In amongst all the shiny silvery dimes was a funny looking coin. It was a 1 cent coin from Singapore! Well, right away that made me think of my favorite hammie, Girl Girl, and all her stuffie adventures. Thinking of her made us so happy, we really didn't mind that we got shorted nine cents in that roll of dimes.
We dropped the Singapore coin in our little coin bank where we keep the odd ones that come through the office, like the Canadian and Australian money and occasional wheat pennies. There's not much, so we're not talking big bucks here, but My Boy likes to shake them out of the coin bank and look through them every now and then. Who knows, maybe some day he'll find a coin worth a gazillion dollars, and we can buy something cool.
I think I would spend it on a dog park, so all my doggie (and hammie) friends can come visit someday!
~Tell
Posted by William Tell at 3:29 PM 11 comments: 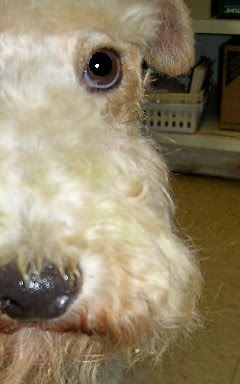 After days and days of rain and cabin fever, we finally had a pretty day of sunshine! We raced outside and had a super romp around the yard. Glynn was so excited that she must have sniffed over every inch of our great outdoors, and when she came back inside, we noticed her mustache was green. Where she stuck her snoot to turn it green, we don't know, unless it was all that wet grass she sniffled through. Whatever color she is, I still think my little sis is cute. Here's a goober shot of her (she didn't like having her close-up picture taken, can you tell?). I call this one GooberGlynn.
Ol' Buddy Buck has settled into our home and doing well. Yep, he's here to stay. No more foster home, it's the real deal for him. The second day he was here, he showed me how to lift the latch on the gate with his nose and open it up. Well, why didn't I think of that? Would have made things much simpler, I can tell you. The gates are usually locked, but he was watching and timed it just right when Mom had her back turned. Unfortunately, we were rounded up and put back inside before we could make our getaway, and locks put on the gates. Well, I'll just file that tip away for future reference, though. Good to know.
So what have your noses been up to this week?
~Tell
Posted by William Tell at 4:42 PM 14 comments: 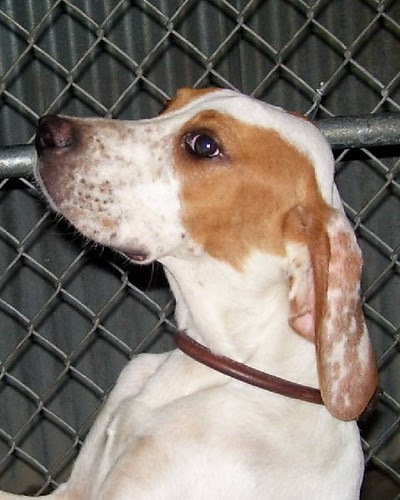 Here's a photo of our latest foster dog. This puppy's owner says he wouldn't stay in the yard and was too much trouble, so he didn't want him anymore. I don't know who could look at this face and not fall in love with those chocolate eyes. So he came home with us today, and we call him Buck. Or as My Boy calls him, Buckaroo Bonzai. After a nice flea bath, a new collar and a trip to the vet for vaccinations, he says he feels like a new dog. My new buddy Buck's a lot of fun, though he's all clumsy puppy at the moment and tends to body slam when he moves too fast. Slick tile floors aren't his cup of tea, either, but he's learning might fast which way is up.

Hey, I'm a lot of trouble myself and I don't always sit/stay where I'm supposed to, but Mom and Dad wouldn't get rid of me, ever! Mom says being troublesome is part of my charm. So if The Family can love me, warts and all, they can take in a prodigal pup who needs adult supervision most of the time. This one might even stay permanently, since Dad is especially fond of English Pointers and had one when he was a kid. 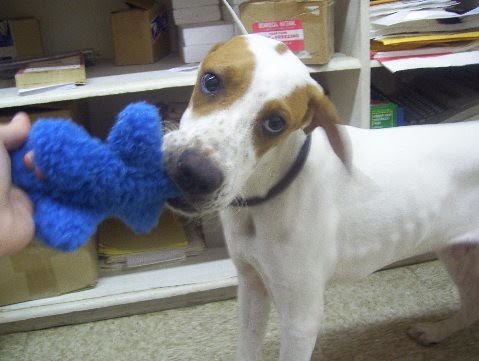 And do you know what Dad's called his first birddog? Buck, of course!
~Tell
Posted by William Tell at 5:05 PM 10 comments:

Mom decided to take advantage of my digging skills, and together we planted some seeds under the arch. Usually we just hang bird feeders from the arch, but now we think it's time to grow some vines there. We mixed morning glory seeds with moonflowers. The morning glories are supposed to bloom early in the day, then the moonflowers bloom in the evening. This should give the hummingbirds something to hum about all day long.
Then we found out that Dad absolutely, with a pea-purple passion, hates morning glories. Well, I don't know what a morning glory ever did to him personally, but he can't abide them at all. He said he spent too many hours as a boy on the farm, weeding those stinkin' morning glories from the crops. Turn around and they were right back in the field, choking out the peanuts and corn and making a mess of things. He said it's hard to kill a morning glory vine, and left alone it will take over a field in no time.
We found this out through a lively discussion with friends, and most of the people in the room felt the same way. Oh, was Mom ever squirming in her seat! She didn't want him to know that she'd planted a whole bunch of them buggers right in the middle of the circle drive.
But nothing happened. Day after day, we checked and found nothing growing under the archway. Whew! What a relief. Mom never had much of a green thumb anyway, so no surprise there. Until this week, then a tiny, spindly green vine sprouted up overnight and entwined itself up the side. We didn't even notice it until it bloomed. 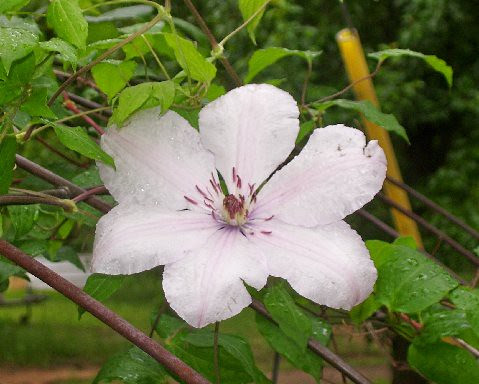 It doesn't look like either a morning glory, or a moonflower, so it's a mystery. It's a relief to see that it doesn't look as dastardly as we thought it would. This morning, Dad stopped and looked at it. We held our breath until he remarked about how pretty it was and asked what kind of flower this is?
Mom's pleading ignorance. I'm not telling, either.
~Tell
Posted by William Tell at 4:36 PM 11 comments: