I Go Bear Hunting and Tree a Big 'Un

First, a thank you to everyone for the kind words since Cap's passing. There is definitely an empty spot at home but Glynn and I are doing our best to keep everyone's spirits up. I do miss aggravating the old fellow, though. He never did more than a bit of grumbling under his breath, but I think he enjoyed it, too. We had our routine, I'd poke him with my nose, he would grrrr, and we'd both be happy. I'd like to think it was the highlight of his day. Was for me. 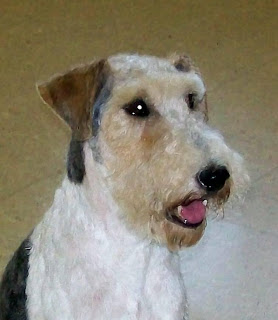 We're in danger of losing a few trees around the house from the heat and drought. The old cherry tree hasn't looked good in awhile, but this year it's pretty pitiful. A lot of the branches are dead and one even fell off. I think the lack of water had just about killed it. 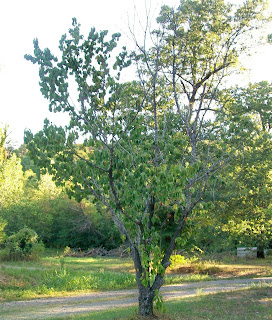 Then we noticed that there are a couple of baby cherry trees growing up from the roots. Yea! Mom is watering them every day and we hope they'll keep growing. I love tart cherry pie. 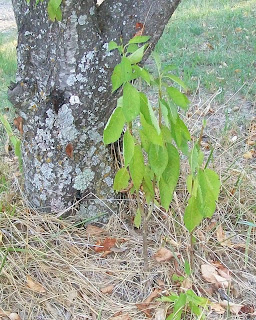 Now, are you ready for a good story? Last night I could have sworn I saw something big outside, so I shouted out, "BEAR!" and sounded the alarm. Yeah, that's right, a BEAR was hustlin' its furry behind up the far side of a tree. I raced over in the dark and could barely make out those huge BEAR paws clawing up the bark. Then it poked its head around to look at me and growled. I told it off good and proper, though I was worried it might turn out to be a Sasquatch but Glynn said that was silly. A Sasquatch can't climb trees, it could only be a bruin of some sorts. So Mom grabbed her camera and we tiptoed around the tree and found this. 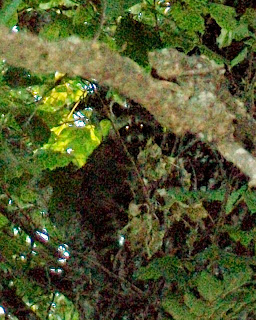 Just a big raccoon and four babies. What I thought were BEAR paws were only the babies scurrying up both sides of the tree trunk behind their mama. What a let-down. I felt pretty silly until Glynn told me that it was alright, she had thought it was a bear in a bandit mask, too. That's the good thing about my Little Sis, she has my back, even when it's facing down a BEAR.
~Tell
Posted by William Tell at 10:18 AM 9 comments: