A couple of friends have asked about Cap and Glynn, and I realized I have been remiss in not introducing them. My two compadres say I'm hogging the blogging, so I'll tell how they came to live with us. 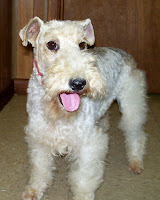 Glynn was found in the Tulsa dog pound. When her time was up, a nice rescue group got her and put her picture on Petfinder. The Family couldn't resist that face, so they filled out forms, got interviewed, had references checked, on and on until we were told to come and get her. Then a terrible snow storm came and the roads were closed for several days. Mom kept calling and asking them to hold onto that sweet girl, she would pick her up as soon as she could drive over there. It was hard to wait, knowing I had a little sis coming to live with us. Like waiting for Christmas!

Glynn was not very socialized, and she still cringes when someone reaches for her. I don't think she got a lot of cuddles before. She also had a long caesarean scar on her tummy, with stitches still in it. Her teeth were in bad shape. Poor girl, we think she may have come from a breeding kennel, but can't imagine how she ended up in a city pound so soon after having puppies. Where were the puppies, anyway? So many mysteries. Glynn won't talk about that time, she's just happy to be here with us now. She's like my little shadow, following me around. You should see the smile on her face when she's being ornery. Her favorite game is to nip me in the bum when we play to make me run faster. It works. 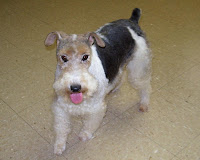 Cap's tale is a sad one. Dad saw him in the back of an animal control officer's truck. He was going to be put down because he was in such bad shape. The poor fellow only weighed 13 pounds, just skin and bones. His eyes were so infected they were bleeding. He's an older dog, so he was shaking when he stood up and wagged his tail. The animal control officer is a friend and he said we could have him if we wanted him, because he didn't think Cap would survive the cold night at the pound's kennel. Well, he didn't have to make that offer twice! Our vet warned us that he was so malnourished he might not survive, but Mom and Dad think every wire fox terrier is special and deserves a chance. After all, there's not that many of us around.
It was touch and go for almost a month, but My Family says it was worth all the trouble and expense. Cap is a whopping 23 pounds now, a bit on the chubby side. He really is a gentleman and has good manners except for being a bit grumbly over me poking my snoot in his dinner dish to see what he's eating. I guess he's afraid the chow might run out and he would get hungry again. No chance of that, I tell him. Have you seen the way we stock the pantry here?
As for me, I came from a nice breeder and was the last puppy in a litter of eight to be sold. The last one picked, My Boy says, but I feel like the pick of the litter anyway. After all, I have my own boy to spend time with, so life is pretty good all around. 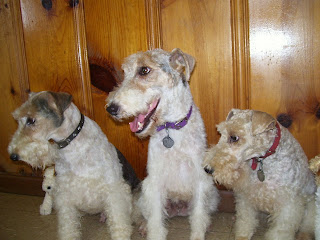 So those are our Happy Gotcha stories. Maybe some of you have gotcha stories to share, too?
~ Tell
Posted by William Tell at 4:37 PM

What awesome stories! You guys are all lucky to have each other!

Love ya lots,
Maggie and Mitch

Wow!! Poor Glynn and Cap!! We are so glad to hear that they are doing well. They deserve nothing but the best after what they've been through, and they got it!! Your parents must be wonderful people! How nice for all of you.

Thank you for your kind words about my blog. I am honored.

Tell...we had no idea about your siblings!! What a wonderful thing for your parents to do, bringing them home like that!!!! All three of you have a life that many dogs could only dream of!

Oh what a great story!!!It is like a movie!!!You are all very very lucky pups.Love A+A

Great stories! Its good to hear they got a second chance. Sometimes that is all that is needed. My mommy and daddy tried to rescue a brother for me but they wont let them cause I'm here.

Hugs, Kisses and Barks
The Bebster

I popped over to say thank you for visiting; but when I read your story about Cap and Glynn I wanted to say so much more. Believe me, I know what a difference your parents made in their lives, and in yours. Be sure and celebrate their homecoming anniversaries when they come around.

As you said, who can resist a wirey face -- but sadly, too many folks don't seem to get it. Happily yours did!!

Tell Cap and Glynn that I'll be thinking of them today on Just Harry Day!!

Happy Gotch day to all of you, whenever they may be. It was a super duper story!

Hey Tell, thanks for telling us about Cap & Glyn's background. I was a rescue dog too, and like Cap, I was in a pretty bad way when J1 and J2 got me. I was sooooooo thin that you could see all my ribs. It took a while for me to reach this level of handsome-ness! I'm so happy that Cap & Glyn found their forever homes with you. J x

Tell
Mommi and I got all teawy weading those stowies..youw pawents must be pawsome hoomans..how wondewful that you got to fowm this family. It sounds like you'we a tewwific bwudder fow Cap and Glynn..what a gweat bunch you awe!!
I was the leftovew fwom a littew too, but my pawents think I'm swell!
Can you all come to my birfday pawty BBQ? The invitation was a few posts back.but I'd love it if you could be thewe
smoochie kisses to all of you
Asta

Hey Tell,
We remember you telling us about Glynn & the snowstorm on Dogster mail. She sure has turned into a little beauty hasn't she?? It still might take her a few years to get over her backing away shyness. We were so glad when you got to pick her up last year. Take good care of each other.
Luv & Wirey Hugs!
Butchy & Snickers

Awww! You should know that you just made my mommy fall in love with your family! She's a big sucker for stuff like this and has a bad habit of bringing other foxies home with her too...but other than Finnegan, she always finds a new home for them. Really though, you're lucky that Cap and Glynn are so nice too.
I have one of those stories too, but mom says its not as bad as many she's seen, so mostly I'm just happy for the wonderful life I have now. Aren't we lucky??!!!

Wow a patchwork pack of wires!